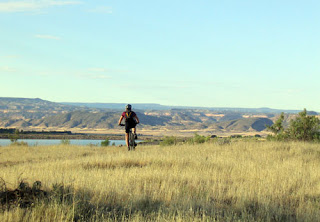 Got up early again and were on the 18 Hours of Fruita trail by 7.30. More singletracky than I'd expected, lots of swoopy flowy loveliness and with the sun just coming up it was a delight to be there. Lots of rabbits, the odd Gofer and the briefest glimpse of some deer proved that we were at one with nature. We finished the 18 Hour course with over 16 hours to spare and retired to the RV for fresh coffee and brownies. We'd spotted some mad looking pedal boats – basically a bike mounted on a mini catarmaran, but the lakeside hire place was closed because it was a week day, so I didn't get to try them, shame.

Not wanting to dwell on the disappointment of the pedal boats we made off for the Kokopelli Trailhead to do Mack Ridge. Fixed a puncture before setting off so it was about 11am when we started turning the pedals and we realised that in Fruita at this time of year it gets pretty hot by 11am, very different to Frisco – but we had lost about 5000' altitude, so it shouldn't have been a surprise. To get to Mack Ridge you have to climb – it's a ridge, see? The clue is in the name. It was quite tough actually, the annoying kind of track that's not steep enough to excuse getting off and pushing, but loose enough and long enough to demoralize. Sue was feeling less than 100% and decided to turn back when the levelled out bit turned upwards again. It was probably just as well she did given what came next. The climb up to the ridge was on rough and loose doubletrack but when you reach the ridge the views are stunning – the massive Colorado river runs a squllion feet below you and there's just this view that I can't put into words, I thought about taking a picture but it wouldn't have captured it - I'd have need a trick camera with wide angle lense and being there 4 hours earlier would have helped too, but trust me, it's a spectacular scene.

Enough of that – the descent starts right away and it quickly leads you into some spicy rock steps that were borderline crash territory for me. Then I was treated to some quality rocky singletrack that had a couple of silly technical moments that I just walked down, but most of it was a total hoot.

I was back 'home' by 12.30 and only the sun stopped me going out for another loop. We'd decided that Highline campsite was too far from everywhere to be of much use to us so we booked in at the Colorado River State Park in Fruita which offered the luxuries of water and electric hook up for the RV. Did the first 'dump' of the grey and black water tanks (grey water come from the sinks, black is worse). A typically chatty american pulled up alongside as we were reading the manual to see what we were supposed to do; “ah! The great leveller! It don't matter how fancy a rig you got, we all end up here doing the same thing, no getting away from it!” Of course everyone loves us because we're from the UK and everyone's got a grandfather from Scotland.