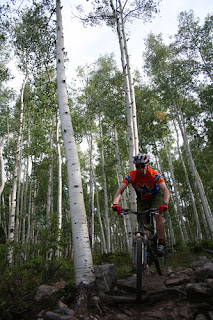 Drove up to Mount Crested Butte first thing in the morning and set off to ride Upper Loop, which was fun. Sue took the easier descent down Whetstone Vista while I did the Upper Upper Trail, which was just some brutal climbs followed by a forgettable descent, Sue's route sounded much better – there you go. We then headed out to do Strand Hill which had been recommended by several people. It started with a fierce climb up a rough jeep track, but it was all doable, I was coping fine with the steady climbs where you just sit and spin, but as soon as things got steep and you needed to put some power into it I was gasping for breath and pushing – that's altitude (at least that's my excuse).

We split again, Sue opting for the easier Strand Hill Bonus Trail, while I did the Strand Hill Standard. It was a hoot. By the time we got back to the RV we'dd been out for about 6 hours and were feeling beat. Created Butte doesn't do RV parks or camp grounds but we found a great dispersed (free) campsite down Cement Creek road and stayed there for a night of thunder storms.