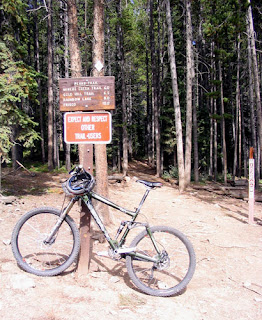 This place is cool. Why? Well, one of the reasons is the free shuttle buses that operate between places. Both me and Sue had slept intermittently again, but had managed a lie – in until nearly 7am. We drove the RV into Frisco where she caught the free shuttle to Silverthorne and I took the bus to Breckenridge – with my bike on the bike-rack. A free bus that takes bikes – I like.

Another reason I like this place is that when some guy hears you're from the UK he doesn't go “Oh, Manchester United, Liverpool...”, no, he says “Steve Peat's an awesome rider man!”. But I digress. The bus ride saved me an hour or so of tarmac climbing and at 9000 and something foot elevation I think avoiding unnecessary climbs is a good thing. Still, there was still a 30 minute climb out of Breck to the start of peaks Trail which sort of contours along about 1000ft below the ridgeline of the 10 Peaks. It's very good. No big climbs but lots of short technical ups. It has rocks roots trees in just the right configuration. The first 6 miles from Breck undulate nicely, to be honest the altitude makes the climbs tougher than they look, a short pull leaves you out of breath and even though i wasn't ragging it i could feel a lactic burn starting in my legs, I guess that's oxygen deficiency for you.

The last 3.5 miles seem to be entirely downhill. You read that right. A very big blast. I got a bit too close to a tree at one point which unerved me a bit when I tried to imagine how many pieces my shoulder would have broken into if I'd hit a tree at warp speed. Eventually i was spat out onto a double track that looked like it was the end of the fun, but directly opposite was a sign for Rainbow Lake trail. I'd never heard of it so i asked the dog walkers who'd just come along it where it went and was assured that it would be a fun return to town. They weren't wrong. A wide and unremarkable track took me past Rainbow lake then headed back into the trees. After a while I spotted a bit of singletrack diving off to the right, so I followed it – fanbleedintastic. Super tight, twisty, rocky, rooty, like the old Innerleithen downhill trails, but better because it's Colorado and its sunny! The icing on the cake.

Sue had been feeling ropey again so did the shops at Silverthorne. After lunch in safeway's car park we hit the I70 and didn't stop until we reached Highline state reservoir, Fruita, site of the 18 hours of Fruita event.