Sea Kayaks, but no sea. 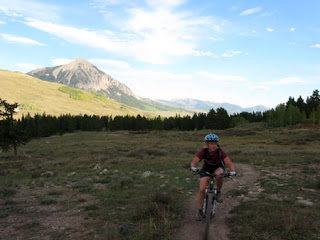 Sea kayaking on blue Mesa reservoir. It was calm as a millpond for the first 3 hours but when the wind picked up it created a bit of a swell to spice things up. The kayaks a had rudders, which I'd never used before – essentially you control the rudder with your feet and steering becomes trivial. That said, I'm not a fan of them for these reasons:

We headed up to Crested Butte after that and did an early evening ride up upper lower loop and back on lower loop and woods walk trail to finish up in town for beer and pizza at the Brick Oven. Had 2 lovely pints of New Belgium Mothership Wheat Beer and rode back up the track o the RV by the light of a headtorch, talking loudly to scare off the mountain lions that had been recently spotted in the area. It seems that Mountain Lions are wary of people who talk too loud – sensible creatures.